One of the happiest tasks of the year was to help our client Encon celebrate their 40th birthday back in September!

Well-known as a leading distributor of insulation, interior systems, fire protection and more, they started out in Halifax back in 1981 and have grown to be a £200m-plus turnover business with 24 branches across the UK.

To mark such an auspicious occasion, Encon wanted to plan something a little special – so on September 10th they sent every employee a special celebration package, decorated each branch with balloons, bunting, party poppers and cupcakes (yum!), and launched the ‘Encon Cake-off’, a baking competition for staff members to raise money for Macmillan.

The event was a roaring success, with the Cake-off attracting many spectacular (and some not-so-spectacular!) entries, and raising over £2600 for the cancer charity.

As part of the campaign, we created a suite of print and digital assets promoting the event internally and to their suppliers and customers. And to top it off, we’ve also produced a special commemorative book centred on the history, the day’s events and reminiscences from many of their longest-serving staff. 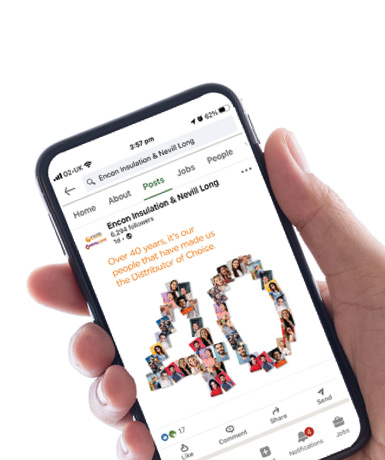 The main event? >
Giving a new name in piling a solid foundation. >
Building the science of building optimisation to life. >
Merchandise made easy. >
Stars of the small screen. >